Is Apple now focusing on the mid-end part of the market?

So far, Apple has only sold 2 iPhone models at the same time: the most recent one and the version before. This has changed after the presentation of the iPhone 4s: looking at http://www.apple.com/iphone/compare-iphones/ you can see Apple selling 3 phones: the iPhone 3GS, the iPhone 4 and the iPhone 4S. All of these 3 phones come with iOS 5 pre-installed, although Siri is iPhone 4S only. 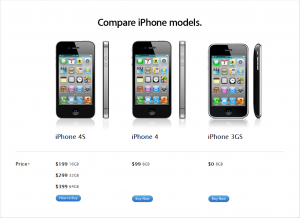 The displayed iPhone 4 has a capacity of 8GB. This is remarkable as an 8GB version hasn’t been sold till now (it used to be 16GB and 32GB). Not only the iPhone 4, but also the 3GS is now significantly cheaper than before. The 3GS is now free in combination with a two-year wireless service contract. This is the first time ever for an iPhone.

These changes specify a fundamental change in Apple. Instead of focusing on the high-end part of the market only, it now also focuses on the mid-end part with cheaper phones. This begs the question: will this affect the image of iPhones in any way? Has the new CEO got anything to do with it? And will Apple succeed in gaining market share because of this change?

This site uses Akismet to reduce spam. Learn how your comment data is processed.